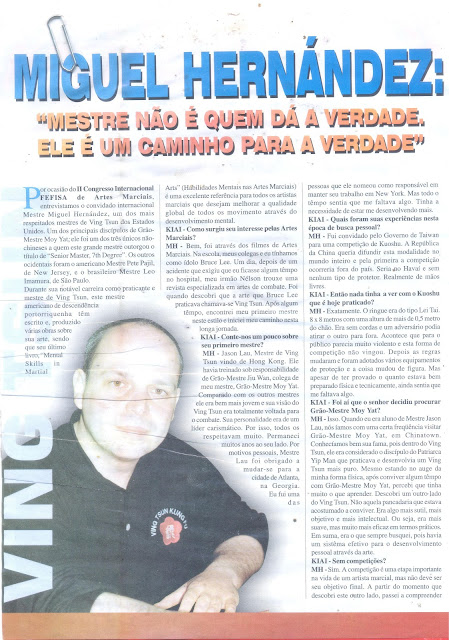 MIGUEL HERNANDEZ!
"MASTER IS NOT WHO GIVES THE TRUTH, BUT HE IS A WAY TO THE TRUTH."
(KIAI MAGAZINE FROM BRAZIL.)
We interviewed  a special international guest: Master Miguel Hernández, one of the most respected Ving Tsun masters from States. One of the top disciples of grand-Master Moy Yat. He was one of three non-chinese that the great master Moy Yat gave the title of "Senior Master 7th Degree". The anothers were Master Pete Pajil and the brazilian Master Leo Imamura.
During his brillant carrer as Ving Tsun practitioner and Ving Tsun Master, this american master descendent of Porto Rico had written and produced a lot of works about his art, between them "Mental Skills in Martial Arts". That is an excellent refference for all the martial artists whom wishes to develop the quality of the movements trough mental work.
KIAI - How your interest for martial arts began?
MH - Well, it was trough martial arts movies. At school me and my classmates had as an idol, Bruce Lee. One day, after an accident that demands for me to stay in  hospital for a time, my brother Nelson brought a magazine about martial arts.That was when I figured out that the art that Bruce praticed was Ving Tsun. After sometime , I found my first master in this style and started my way in this long journey.
KIAI- Tell us a little about your first Master.
MH- Jason Lau , Ving Tsun Master from Hong Kong. He trained under grand-Master Jiu Wan, friend of my Master Moy Yat. Comparing him with another masters at the time, he was very young , and his vision about Ving Tsun was totally for combat. His personality was like a carismatic leader. Thats why everyone respected him. I stay by his side for many years , and for personal reasons, Master Lau was obligated to move to Atlanta in Gerogia. I was one of the only students that he nominated to keep his work in New York. But all the time, I felt like something was missing inside me. I had the need to increase myself.
KIAI - What were your experiences at that time of self-search?
MH- I was invited by the Taiwan Goverment for a Kuoshu competition. The Republic of China wanted to spread this sport all around the world and for the first time the tournament would be held outside the country.It would be in Hawaii without any protector. A real free-hand competition.
KIAI- So, it was not similar to the Kuoshu that we have today?
MH - Exactly.The stage was the Lei Tai model. Without strings and a cotender could push the another outside the lei tai.But for the audience this was very violent, and this kind of competition did not make success. Later, the rules were changed and protectors start to be used and the thing change.But even proving that I was very prepared phisycal and techinically I still felt that something was not there.
KIAI - So, that was when you decided to look for Moy Yat?
MH- Yes.When I was a student of Master Jason Lau , we often visited Master Moy Yat in Chinatown. We knew his fame a lot. 'Cause inside Ving Tsun, he was considered the last disciple of Ip Man who was teching a more pure Ving Tsun. even in the high level of my phisycal capacity, living with Master Moy yat, makes me figure out that I have a lot to learn.I found out an another side of Ving Tsun.Not that non-stop fighting that I was used to live within. That was something more soft , more directly, more intelectual. I mean, It was softer but a lot more eficient in pratical terms.
Indeed, was what I always search for, 'cause there was a efective system for the personal development trough the art.
KIAI - Without tournaments?
MH- Yes. The competition  is a important phase inside the life of the martial artist,but it can be his final goal.By the moment that I discover this other side , I started to understand.... 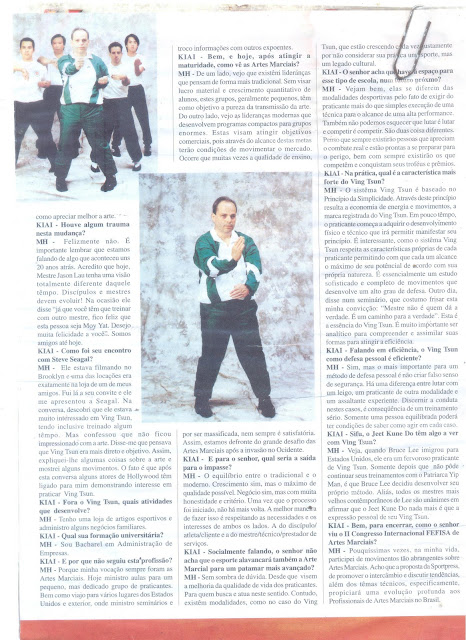 TOMORROW: THE LAST PART OF THE INTERVIEW ON PAGE 2!
Postado por A Journey of Ving Tsun Life às 16:50:00