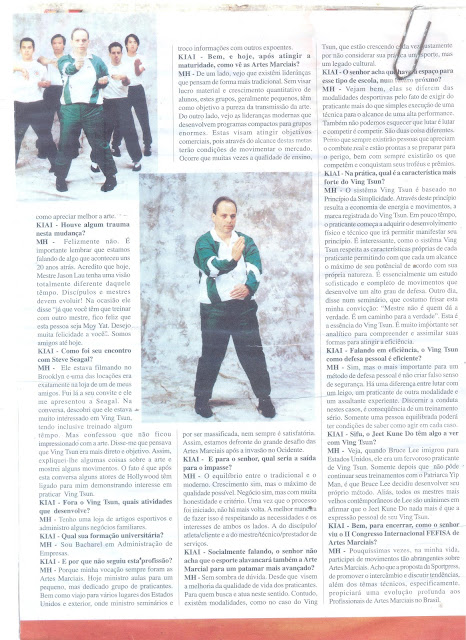 INTERVIEW WITH MASTER MIGUEL HERNANDEZ IN A BRAZILIAN MAGAZINE.
FINAL PART.
MH- ... as to apreciate more the art.
KIAI - Any trauma happened in this change?
MH- Fortunately not. Is important to remember that we are talking about something that happened about 20 years ago. I believe that today Master Jason Lau has a totally different vision of Ving Tsun. Masters and disciples has to improve themselves.
On the occasion he said: " If you have to train with another master, makes me happy to know that you will be trainning under Moy Yat. I wish happiness to you." We are friends 'till today.
KIAI - How was your meeting with Steven Seagal?
MH - He was shooting in Brooklyn, and one of the locations was exactly at a shop of one of my friends. He invited me and introduced me to Steven Seagal. During the conversation I discovered that he was very interested in Ving Tsun. Had trained by a short period.
But he said that the art did not impressed him. Said to me that the Ving Tsun was more direct and objective. So, I said somethings about the art and show him some movements. The fact is that after this conversation some hollywood actors call me interested in Ving Tsun.
KIAI - Besides Ving Tsun, what is your another activities?
MH- I have a sports shop and also managament of family business.
KIAI - What is your college graduation?
MH- Company Administration.
KIAI - And why not follow this profession?
MH- 'Cause my vocation always were martial arts. Nowadays , I teach for a small but very dedicated group. Also , I travel around the US and abroad where I make lectures , but in those cases , the number of people does not bring a good result. So, we are in front a great challenge of Martial Arts after the invasion of that in West.
KIAI - And for you, what should be the solution?
MH- The balance between the traditional and the modern.Growing? yes. But with quality. Business yes, but with a lot of honesty and critery. As the proccess has a start, it could not return. The best way to be that is respecting the interests of the both sides. The side of the disciple/athete/client and the side of the master/coach
KIAI - Speaking about social enviroment , dont you agree that the sports will put the martial arts on an another level?
MH- Without doubt. But if the people pay attention to the development of the quality of the life of the practitioner and for who searchs and acts in this world.But, there some arts like Ving Tsun that is growing exactly for not considerate the art as a sport but as a cultural legacy.
KIAI- Do you think that will be "room" for this kind of martial arts school in the future?
MH- Look, those kinds of arts are different from sports 'cause its demands from the practitioner more than a simple execution of a techinique for a high perfomance.
We also can not forget that fight is fight, competition is competition. two different things.
I think that will appear people who apreciates the real combat  and will be read to get ready for the danger, but also there will be people that just compete and earn trophys and medals.
KIAI- What is the main caracteristic of Ving Tsun?
MH- The Ving Tsun System is based on the principle of the simplicity. Trought this principle there is a economy of movements and energy. the main caracteristic of Ving Tsun.In a short time, the practitioner, starts to develops phisycal and techinical skills to manifest this principle. Is interesting how the Ving Tsun System respects the own caracteristics of each practitioner. Allowing them to reach the maximum of their potential along with their own nature.Is essentially a study of sofistified movements that develops a high degree of defense. Another day, I said during a seminar that I have a conviction: "Master is not who gives the truth.He´s a way to the truth". This is the essence of Ving Tsun. Is very important to be analitical to understand and use its forms to reach the efficience.
KIAI -  Master, the Jeet Kune Do has something linked to Ving Tsun?
MH- Look, when Bruce Lee came to US, he was a very dedicated Ving Tsun student. Just after being not able to keep his trainning with Ip Man, that he started to develops his own method. Indeed, every senior masters who lived at the same period of Bruce Lee, says that the Jeet Kune Do is just an expression of his Ving Tsun.
Postado por A Journey of Ving Tsun Life às 17:55:00